The billboards, digital ads, and organizers call on these senators to conduct a fair impeachment trial and vote to remove Trump from office. The billboards and ads are slated to run through Saturday, Jan. 11, but may be continued as the Senate impeachment proceedings continue to take shape. The four organizations are spending more than $400,000 on these efforts.

See samples of the mobile billboards and digital ads here: 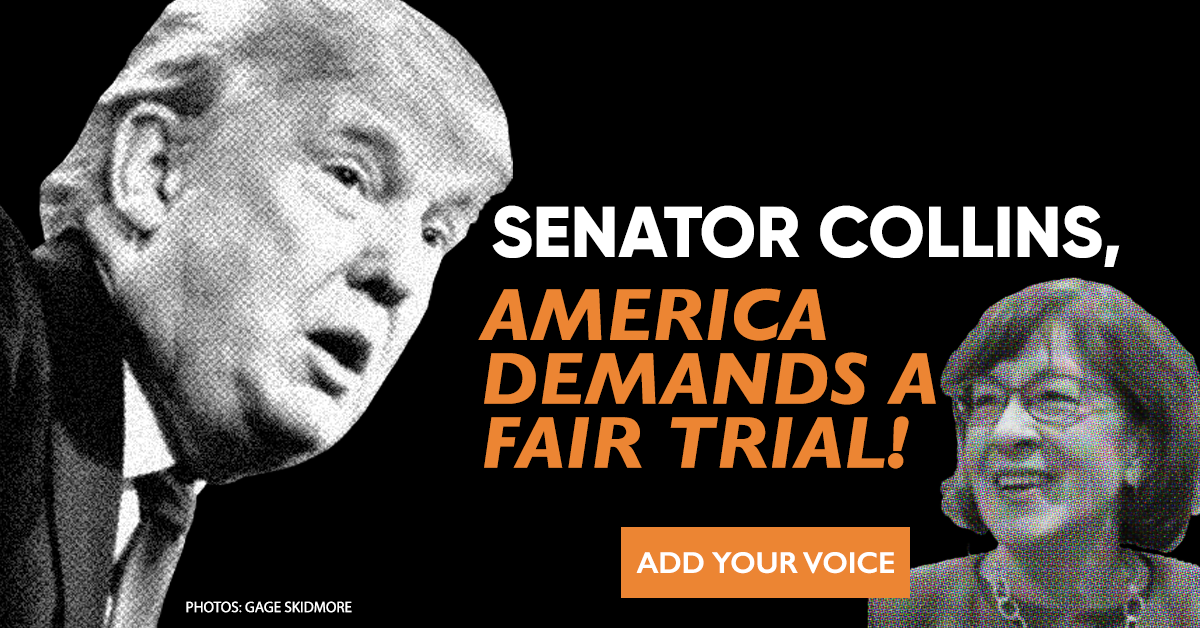 “The time has come for the Senate to finally hold Trump accountable for his crimes against our nation,” said Carolyn Fiddler, communications director for Daily Kos. “Daily Kos calls on all senators, especially Senate Republicans, to honor the Constitution and and carry out the will of the American people by conducting a fair trial. They have the power and responsibility to uphold the sanctity of our democracy.”

“A strong majority of Americans wants the Senate to remove Trump from office for the crimes and abuses of power for which he was impeached, said David Sievers, MoveOn campaign director. “Mitch McConnell is not even pretending to be fair, and has refused to commit to the fundamentals of a fair trial, such as allowing witnesses. We need his Republican colleagues to reject Mitch’s Kangaroo Court and granting the fair process we all deserve.”

“The American people will not tolerate a President who abuses their power and obstructs Congress. If Senate Republicans choose to abandon their constitutional responsibility and help Donald Trump cover up his crimes, it will be a betrayal to our democracy. Americans are watching Senators such as Martha McSally, Cory Gardner, and Susan Collins especially closely. Donald Trump must be removed from office,” said Nathaly Arriola, executive director of Need to Impeach.

“The American people are standing up to demand a fair trial and ultimately the removal of a president who used essential military aid to pressure a foreign government to interfere in our elections. Hundreds of thousands marched for his impeachment and removal a recent poll shows that 2/3 of Americans in key swing states believe the Senate should conduct a full trial and carefully consider the evidence on both sides,” said Jonah Minkoff-Zern, co-director of Public Citizen’s Democracy Is For People campaign.

For all other inquiries:
[email protected]