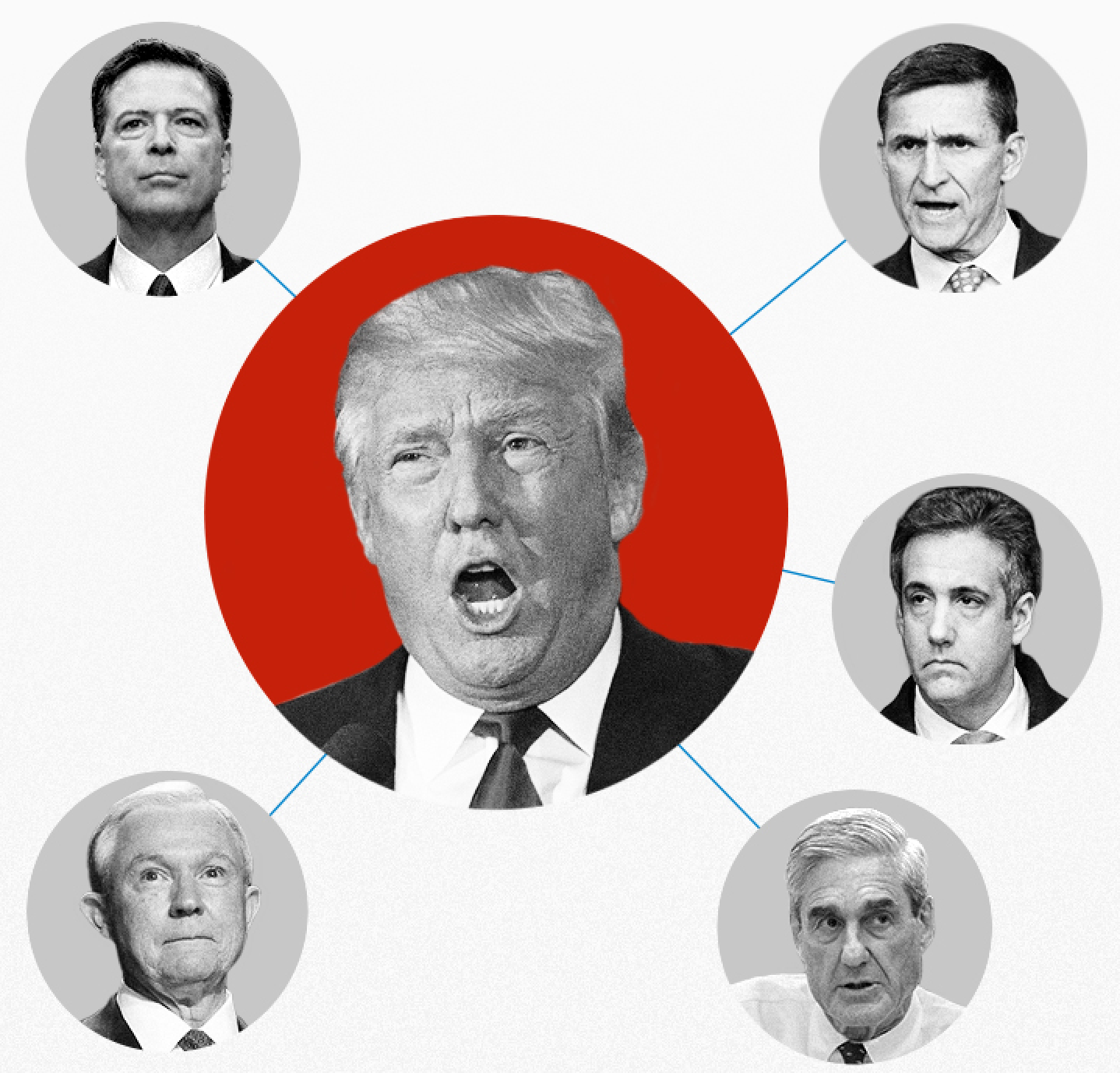 Trump’s hand-picked Attorney General William Barr may have tried to clear him of this charge, but Special Counsel Robert Mueller specifically did not exonerate him. A review of the Mueller Report and information already in the public record shows why: Trump interfered in federal investigations and tried to influence their outcomes, violating federal law. That is a clear case of obstruction that any other public official would be prosecuted for. In this case, that job falls to Congress.

What’s the evidence and what does it mean?

The trail of evidence starts with Trump’s attempt to get James Comey, the FBI director responsible for overseeing the investigation into Trump’s relationship with Russia during the 2016 election, to drop an investigation into National Security Advisor Michael Flynn. When Comey refused, Trump fired him. When the President fires people who are investigating him in an attempt to disrupt that investigation, it’s textbook obstruction.

But he wasn’t done after Comey was gone. Trump made several other attempts to stop the investigation by trying (unsuccessfully) to fire Special Counsel Robert Mueller, who was appointed to oversee the Russia investigation. He has pushed out officials surrounding the investigation and sought to replace them with his loyalists. He has intimidated witnesses, and publicly dangled pardons, likely in an attempt to persuade them to change their testimony.

Among Trump’s most shocking instances of obstruction, he ordered former White House Counsel, Don McGahn, to have Mueller removed. McGahn’s clear recollection was that Trump directed him to tell Deputy Attorney General Rod Rosenstein that conflicts existed and ‘Mueller has to go.’ McGahn said he responded that he could not make such a call and that the President should instead consult his personal lawyer because it was not a White House issue. Feeling “trapped” by his role in the White House, McGahn threatened to quit.

In January 2018, a New York Times article broke a story revealing that McGahn threatened to walk after being asked to fire Mueller at which point Trump backed off. Trump complained that McGahn had leaked the article and that it was wrong, yet he decided to resort to his obstructive behavior to address this problem. Trump then ordered McGahn to deny he demanded to have Mueller removed. He asked him to create a false record of their meeting which he would use as evidence to dispute the article. This is what obstruction of justice looks like.

Trump obstructed justice in both of these instances. He knew of Mueller’s investigation into him and attempted to curtail his efforts–textbook obstruction. But these aren’t even the only instances. From the episodes outlined by Mueller to Trump’s behavior to Michael Cohen, his actions form an obvious pattern: Trump routinely broke the law in an effort to take down Mueller’s investigation. No one is above the law—not even the president. Let’s hold him accountable.

1
OBSTRUCTIVE ACT
All corrupt conduct that could prevent justice—even if the action itself is not successful.
2
NEXUS TO A PENDING PROCEEDING
When the obstructive act is connected to an official proceeding or a potential official proceeding.
3
CORRUPT INTENT
When someone acts knowingly and dishonestly to gain an improper advantage.

The FBI Director responsible for launching an investigation into Russian interference in the 2016 presidential election. Read More

Comey’s predecessor at the FBI, appointed as Special Counsel by Deputy Attorney General Rod Rosenstein to lead the investigation into "any links and/or coordination between the Russian government and individuals associated with the campaign of President Donald Trump..." Read More

Trump’s ex-National Security Advisor Michael Flynn pleaded guilty to lying to the FBI about his communications with former Russian Ambassador Sergey Kislyak, and about the money he received from the Turkish government. Read More

Former Executive Vice President of The Trump Organization who served as Trump’s personal lawyer and confidant for 11 years. Read More

A longtime Republican political strategist who served as Trump’s campaign manager before being asked to resign, and was ultimately sentenced for tax and bank fraud. Read More

How Comey Relates to the Case:

How Mueller relates to the Case:

How Flynn Relates to the Case:

Michael Flynn’s problematic relationship with the Russian government was the original topic of the Russian interference investigation. When Trump discovered Flynn was being investigated, he asked Comey, the FBI director leading the investigation, to drop the case—an obstructive act.

How Cohen relates to the Case:

Telling or encouraging someone to lie to Congress is a crime called subornation of perjury, and Trump’s efforts to alter Cohen as a witness were intended to lead federal investigators astray and impede the investigation.

How Manafort Relates to the Case:

As Trump’s Campaign Chairman, Manafort was a key figure in Trump’s dealings and, as a result, in Mueller’s report. Dangling a pardon over someone to prevent them from testifying is obstruction.

How Lewandowski Relates to the Case:

How Sessions Relates to the Case:

Removing people surrounding the Mueller investigation because they are viewed as disloyal and replacing them with people intent on crippling the investigation, is an obvious sign of obstruction of justice.

How Barr Relates to the Case:

Under the rules of the Special Counsel, Mueller submitted his complete report to Barr in his capacity as Attorney General. Upon receiving the report, Barr distorted it to the public in an effort to clear the President. Since the report was released and Barr released his summary, Mueller responded with a formal letter to Barr expressing frustration at how he represented the report's findings.

How Rosenstein Relates to the Case:

When Sessions recused himself from overseeing the Russia investigation, he appointed his Deputy Attorney General to take over. To preserve the independence and the appearance of independence, Rosenstein appointed Mueller to lead the probe as a Special Counsel.

2. Profiting from the Presidency

3. Soliciting Foreign Interference in US Elections

9. Violating Immigrants' Right to Due Process